In this article, I shall explain you the meaning and definition of Nostro Accounts, Vostro Accounts and Loro Accounts with examples. We will further discuss how the transactions are performed through Nostro Accounts. You will be able to learn the following topics by the end of this note.

The term ‘NOSTRO’ has emerged from the Italian word ‘Nostro’ which meaning is ‘OUR’.
“NOSTRO ACCOUNT can be defined as a bank account open by any commercial bank of a country in any bank of a foreign country with a denomination of foreign currency.”

The interest rate is not paid to NOSTRO ACCOUNT, however, in case of insufficient balance or overdrawn amount, some fee is chargeable to these accounts. Nostro Accounts are typically utilised to facilitates foreign trade and foreign exchange transactions. 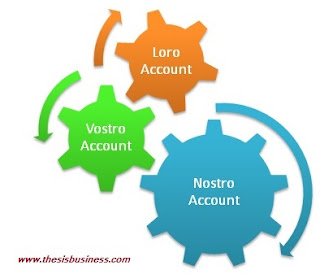 “Vostro Account refers to an account held by a foreign-based bank in the domestic currency with the domestic bank of the country”
The term ‘Vostro’ is also an Italian word which means is ‘Yours’.
It is just like the inverse of Nostro accounts. Let us understand with an example.

Suppose City Bank (USA based bank) opens an account in HDFC BANK (India based bank) with the Currency INR (Indian Rupee), then this type of accounts is called Vostro Account.

Thus single conclusion can be drawn from the above definitions of both Nostro and Vostro accounts.
If HDFC bank opens a bank account in City Bank, it will be a Nostro Account for HDFC Bank and from the City Bank’s point of view, it would be a Vostro Account.
You would be thinking what about Loro account.

Nostro accounts will be credit when the actual inflow of foreign currency exists whereas the account will be debit while actual outflow of foreign currency happens. Few examples are described below to understand clearly.
1) Suppose Mr A requests the bank in India to immediately transfer $ 10,000 to his father’s account in Washington USA.
2) Suppose Mr X is an Indian businessman hold an account in HDFC Bank and he exported some goods of Rs. 10,00,000 to American company ABC Pvt Ltd. which holds the account with City Bank in the USA. Now Mr A has to receive payment of that invoice.
3) Consider Mr X approaches HDFC bank to get a DD of $5000 issued in the favour of XYZ Pvt ltd payable at Boston (USA).
4) Now let us assume Mr X receives a DD of $ 5,000 payable at New Delhi (India) from his client Mr Y who belongs to Washington (USA).
Thus we can conclude a future contract of foreign exchange will not be entered in Nostro account, in fact, it would be debited or credited whenever actual inflow or outflow of foreign exchange is
performed.
Hope you have understood the significance of Nostro accounts in foreign exchange transactions. Thus it plays a key role in international trade.
You might also be interested in the following topics:
What is a derivative? Types of derivatives | Comprehensive explanation
What is a Credit Rating? An overview
What is Financial Market? Types of Financial Market
References
Investopedia