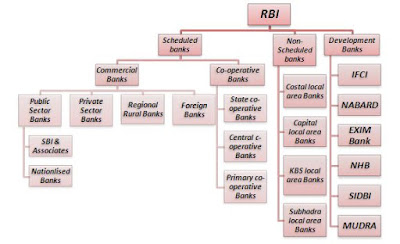 Types of Banking in India:

Basically, the Banks in India can be categorised in three segments. We will go through each segment one by one.

The Commercial Banks are those financial institutions which accept deposit and provide services like loans, credit, opening bank accounts, locker facilities, foreign exchange and other digital services like mobile banking, Internet Banking, NEFT, RTGS etc. These banks are basically profit-making and consumer-oriented institutions. In other words, these banks deal with the financial requirements of the general public.
The Commercial Bank can be classified as below.
Let us explain each one by one in short.

Those banks in which more than 50% stake is held by Government of India is defined as Public Sector Banks and the shares of these banks are listed on the stock exchange too. Few examples of banks are given below although the total number of PSBs are 27.

The banks which are incorporated or have their headquarters in a foreign country and open their branches in India as per RBI Act 1934 is known as foreign banks.
Some examples of the foreign bank are:

These banks are generally operating at the regional area to facilitate backward people in society. The purpose of RRBs to offer the banking services at the doorstep of rural masses especially in remote areas. These banks provide services like deposits, withdrawals, short term credit to the small farmers, labours, small entrepreneurs to increase their productivity.

This Vijaywada, Andhra Pradesh based bank was established on 27 Dec 1999 and operating in Krishana, Guntur and West Godavari.

This bank was established on 14 Jan 2000 and operating in Jalandhar, Kapoorthala and Hoshiarpur in Punjab.

This bank is based at Kolhapur having only 8 branches.

This was the first Development Bank of India which was established in 1948 by the Government of India. The headquarters of IFCI is situated in New Delhi. The main purpose of this bank was to provide long term finance to the industrials.

This bank was established on 12 July 1981 by the recommendation of B. Shivaraman Committee being headquartered in Mumbai. The initial capital of this bank was 100 crores later RBI sold its stakes to Government of India which holds 99% stakes of NABARD now.

NABARD was established especially for the development of agriculture and rural area and handle financial problems mainly related to agricultural and rural development.

This bank was established to encourage foreign trade of India. Its main objective is to arrange funds for the companies which are dealing in export-import business. This is fully owned bank of Government of India and established under Export-Import Bank of India Act 1982.

This bank was established on 9 July 1988 by the Government of India. This bank is regulated under the National Housing Bank Act 1988 and also is the supreme bank of the housing and finance.

The main objective behind setting up this bank was to make available easy and affordable housing loans at the regional and local level.

NHB is also responsible for regulating activities of the housing finance companies in India.

SIDBI was established on 2nd April 1990 under the Small Industries Development Bank of India Act 1990 having its headquarter in Lucknow (UP).  SIDBI was set up for the promotion, financing and development of small, micro, medium industry in India.
Moreover, the objective of SIDBI is to strengthen and facilitates entrepreneurs who are facing financial problems in expanding their businesses.

MUDRA Bank was established on 8 April 2015 and launched by the Prime Minister Shri Narendra Modi with the initial capital of 2000 crores and a credit guarantee fund of 3000 crores under Pradhan Mantri MUDRA scheme.
Initially, this bank is functioning as Non- financial company and subsidiary of SIDBI. Later on, this will be made a separate institution.
The principal objective of this bank to provide loans to small manufacturing unit, shopkeepers and street vendors at low-interest rates under the following schemes.

Hope this article would be able to guide you to understand the types and structure of the Indian banking system. In a nutshell, there are three major types of banks in India: Commercial banks, cooperative banks and development banks. The Reserve Bank is the head of all types of banks operating in India, that means every bank has to follow the rule and regulation of RBI.
You may also interested in,
Nationalisation of Banks in India
Cooperative Banking in India
Banking Ombudsman | Banking Ombudsman Scheme